Per usual, I bought an unfamiliar ingredient and picked out the perfect recipe without reading it through. Short ribs were on sale and they were going to happen, whether the fam wanted them or not.

The recipe I wanted to try was Tom Colicchio’s lovely wine-marinated, slow-braised short ribs (which required marinating overnight in a bath of red wine, herbs and aromatics). Next thought…why not use the sous vide?? Welp, that short ribs recipe instructed a 48(!) hour cook in 180 degree water.

Aha moment! I can cook the ribs sous vide all day in the marinade and then do 1.5 hour braise just in time for dinner. Right? (Here goes nothing.)

First, I seared the ribs at high heat, took them out of the pan, and added the veggies and garlic in the pan. Second, I added a bottle (do it big) of Pinot noir to reduce with the veggies and with added sprigs of thyme.

(In the meantime, I set up the sous vide to preheat to 180 degrees – this takes a good bit of time so I heated up water in the tea kettle – to add to the water bath and speed up the water-heating process.)

I retrieved some chicken stock from the freezer and added it to the wine reduction (now cooling). Then added the ribs to the plastic bag with the wine marinade/cooking liquid, and vacuum-sealed the bag. Once the sous vide was preheated, I added the bag of yumminess and left it in there to cook for 6 hours.

After that, I poured all of the contents in a Dutch oven and put it into a 350 degree oven with the lid ajar for an hour and a half. I grilled the ribs before serving, and reduced the liquid, simmering in the pot, while the ribs were getting roasty and charred on the edges.

The ribs were not “fall apart” tender but were seriously delicious. The leftovers were kept in the liquid for dinner on Monday, and I just poured them in a pan to heat up and further reduce for dinner time. 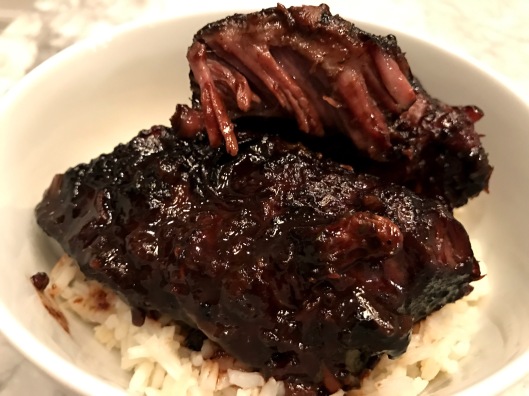 (WARNING: DO NOT CLICK TO SEE A LARGER VERSION OF THE ABOVE PHOTO. MAY CAUSE DROOLING AND LOSS OF BREATH.)

The combo of Chef Colicchio’s marinade and the combo sous vide/braising cooking technique really paid off. I essentially took a three-day process between the two recipes and shrunk it down to eight hours, with a quality reheat the next day.

I served them over rice, but mashed potatoes or buttered egg noodles would be divine.

Does making pie crust from scratch seem daunting? Do pies seem like something just grandmas and competitive soccer moms do?

No! You deserve fresh strawberries glazed in sugar and encased in a flaky, buttery blanket. It can all be yours! (Just with a lot less work than you THINK it will take.)

Living in Florida has many benefits, but the early fruit and other fresh produce is something that is really invaluable. Seeing these beauties inspired me to make a Strawberry Galette for a brunch gathering this weekend. (And galette just means pie, but without the fussy crust.)

Keep in mind that you can buy pie crust from the store, and this would be lovely. But being the slightly overwrought food nerd that I am, I wanted to make the crust myself. I used Smitten Kitchen’s Berry Galette crust and loosely adapted the filling part.

I diced Kerrygold butter and put it in the fridge to chill while I got out the other ingredients. I didn’t have ricotta so I used sour cream. I also have about 25 different salts, so I used a fine grey French salt (close to Fleur de Sel but less expensive).

I find in baking that going a little higher end on key ingredients like butter, vanilla and salt transform something good into something spectacular. (My Toll House chocolate chip cookies have stunned people, not kidding.)

After cutting the cold butter with a pastry cutter into the dry ingredients, you gently fold in cold water and sour cream with a spatula or wood spoon (or your hands!) to make a craggy, ugly ball. Then wrap it in plastic and flatten into a disk. Put it in the fridge for at least an hour and you can use that time to make the filling.

Another tweak I made: I cut up one container of the strawberries and cooked them down with a 1/2 cup of sugar (they were really tart), lemon zest, the cornstarch and a splash of Madagascar vanilla. (Instead of just tossing the uncooked fruit with the other filling ingredients as the original recipe instructs.)

While those strawberries cooled, I sliced about 10 more strawberries and rolled out the crust on parchment paper. I drained some of the cooked strawberries (about a 1/4 cup of juice) and microwaved the resulting strawberry juice with about four tablespoons of sugar to make a glaze. ( I just added sugar until it tasted like a strawberry syrup to be honest.)

The cooked strawberry mush (basically jam) went on the crust first, leaving 2 inches around the edge. Then the raw strawberry slices were added on top in a spiral until covering the fruit. Lastly, I folded the crust over, and glazed the fruit. Last step is brushing the crust with egg wash and sprinkling heavily with sugar (coarse sugar would have worked better, but I was out. )

Bake at 400 degrees for 30 minutes or golden brown.

Look at this monster! This thing smelled like sunshine, Springtime and grandma’s kitchen all wrapped up in one. The parchment paper was a lifesaver, both in the dough rolling process (had to stick it in the fridge when the butter started getting to warm and the crust became unmanageable) and in transferring the finished galette to a serving plate. 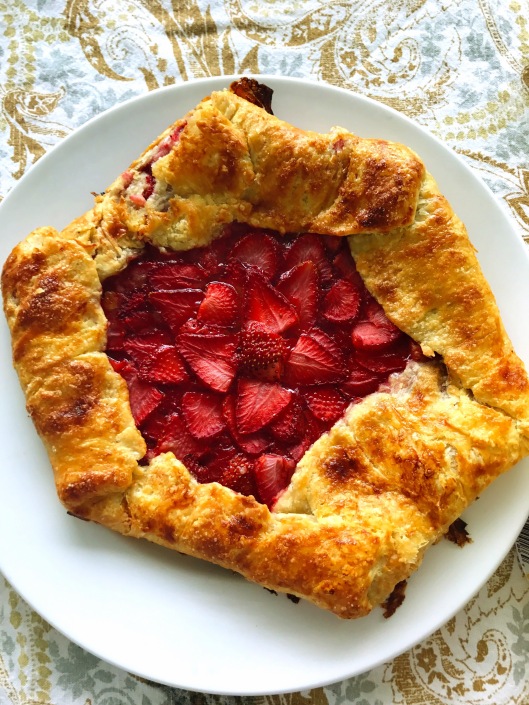 Two notes after finishing this little beaut: 1) definitely double or triple the recipe. One of these could serve 4-6 people at most (depending on how small your slices are and how hungry your guests are) and you definitely want leftovers; 2) taste the strawberries to determine how much sugar you need. These strawberries were hella tart and needed A LOT more sugar than the recipe recommended, and it still wasn’t a “sweet” pie.

You can probably tell by the picture, but the crust was sublime, both flaky and tender. Reminded me of a pie crust with smidge of biscuit in buttery texture. This is perfect for dessert, brunch, breakfast or just to celebrate fresh strawberries. (Serve with your favorite vanilla ice cream.)

I love books of all kinds, but cookbooks and YA badass heroines are my weaknesses. Getting a new cookbook and reading it from cover to cover is always a delight. I got The Cuban Table awhile ago, but kept putting off committing to a recipe.

I can’t remember what triggered my need for Cuban food, but this pork roast instantly called to me when I was looking for a good Sunday dinner. (Cautionary tale: I skimmed the recipe and didn’t notice the overnight marination until too late…so it became a Monday dinner .)

The marinade is straightforward, but I wanted to make it a little easier so I used storebought Mojo and doctored it with the juice of one blood orange. You can substitute half orange juice/half lime juice for the blood orange, but they are becoming more common at the grocery store. (These oranges have a beautiful red interior and contribute color as well as flavor.) Made the prep very simple.

Monday morning, I drained the pork butt, placed it in the Dutch Oven, and put it in a 250 degree oven, and left for work (about 8 a.m.)

(For those concerned about leaving the oven on unattended, here is a detailed article on the pros and cons.)

The reveal at 6 p.m. was pretty impressive and my house smelled like citrusy porky goodness. I took of the lid and broiled the roast, which resulted in a gorgeous crackly crust on the top. I really wish I could share the smell with you. Drool! 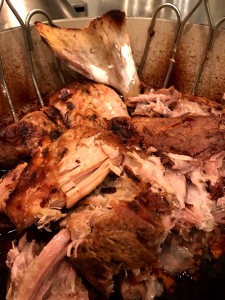 The bone came right out, the meat was succulent and silky, the crispy top added the perfect crunch to balance the meat.

The absolute icing on the cake was the Mojo Criolla, which I made as suggested as the finishing sauce.

Fresh oregano, orange/lime/blood orange juice and garlic are combined, and then separately, lard heated up. It is very dramatic as you pour the hot lard into the juice mixture with lots of popping and bubbling as it cooks the garlic and oregano.

My black bean recipe starts by sautéeing onions, carrots and garlic, then adding two cans of rinsed black beans and enough stock to almost cover, simmer for an hour. I also like to reserve some diced onions and place them in a little lime juice to use as a topping for my beans.

This recipe was relatively simple, but really delicious. And I was lucky that blood oranges were available, they added a nice sweet/sour flavor and color.

This entire cookbook is gorgeous, and after the success of this Lechon Asado, I am looking forward to diving into the rest of the recipes.

Last year, I made it my mission to conquer bread baking. I failed massively at times and completely surprised myself at others. One of the experiments that shocked me with the ratio of low effort to maximum result was English Muffins.

The batter takes the same amount of time and work as pancakes. Throw everything in the mixer and let it go for about five minutes, until stretchy and shiny. Then let rise for 1-2 hours until very puffy.

I put my griddle on the stovetop at low heat and a sheet pan in the oven (heated to 350 degrees). I lightly scattered semolina on the griddle, placed the rings on the griddle, and scooped out palm-size globs of dough. (Technical term, lol.)

(The recipe calls for the dough to be rolled into balls, allowed to rise a bit, and then flattened, before being placed on griddle – you can try either method.)

I smooshed the globs into the rings and as they slowly toast on one side, the other rises slightly to fill the ring. Honestly, you can go without the rings as the dough doesn’t spread very much, but I love the traditional shape.

After they have good color on both sides, I put them in the oven on the sheet pan to finish for about 10 min. or when an instant read thermometer reads 200 degrees.

Prep takes about 15 minutes, rise takes 1-2 hours (unmanned), and cooking takes about 25 minutes. Really not work intensive, but you have a plan ahead to build in the proofing time. BUT THEY ARE SO SO GOOD.

Try this when you have a lazy weekend, and I promise you will be shocked at how delicious these are (and everyone else will think you worked for hours and hours on them.)

All Out Of Forks